As one of the most interesting features on the menu for last weekend’s Colonial dinner, and especially prepared for pre-dinner canapes, I made little curried possum pies.

For some months now I’ve been working with possum meat from Bruny Island Game Meats.  It’s a lean, clean meat when butchered properly, which I am told is quite an art.

I’ll admit it did take me a while to get my head around this.  I am rather fond of possums and when we lived at Eaglehawk Neck I used to feed them Anzac biscuits on the balcony each evening.

However, since coming to live on the farm here at Molesworth, I’ve realised that, though I think the sheep are lovely as they follow me round each afternoon hoping for a treat of apple or carrot, it hasn’t diminished my being partial to a lovely roast leg of lamb.  Not from any of the sheep from here of course – I prefer my meat anonymous.  The same principle applies to possum meat.

Still, it was with considerable reluctance that I finally did try it.  I was pleasantly surprised in that the meat is quite lean, rather like chicken thigh fillets to handle.  It needed long, slow cooking, though not in a slow cooker per se – I cooked it for several hours in a Le Creuset style pot on top of the wood heater.

I played with the recipe until I was happy with it, and then, as I said, used this for canapes for the guests at the Port Arthur Colonial dinner last weekend.  For those who were brave enough to try them (most guests did), they were very well received and pronounced delicious. I have found that the inclusion of a little cheese in the shortcrust pastry adds a level of creamy saltiness that complements the possum perfectly.

For the dinner daughter Stephanie and I made over 6 dozen in all, along with the tamer small vegetarian quiches with basil for those who preferred to stay on more familiar ground.

For those who would like the recipe, along with over 220 new and mostly preserves recipes, it will be in my next book (to be released next April) – “A Year on the Farm”. 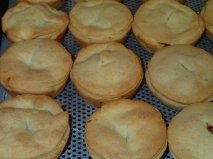