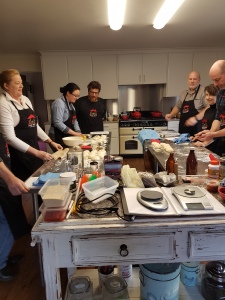 It was Herman the bread oven’s time to take a turn at cooking. We think that Robert baked about 30 pizzas in all, maybe more in the end, when friends dropped in later in the afternoon and extra were prepared for dinner.

Carmichael, the wood burning slow combustion stove in the cooking school happily baked a huge focaccia to accompany a large potful of pulled pork at lunch time, to make a bit of a change from all the pizzas.

The poor electric stove was used only to bake some cider scones for morning tea, and then only because all the wood fired ovens were otherwise engaged.

Poppy the puppy had a lovely day with loads of cuddles from those who came along. She is a dog of little energy at the best of times so obviously decided that today was to be for sleeping, warm and cosy in a chair in front of the heater (Hester).

Old ginger Tom had a wonderful day also, much admired and loved all the attention. The mischievous Rosie, was characteristically naughty, trying to sneak into the cooking school space and when she couldn’t, beat up poor little Truffles cat. She’s happy today though, asleep at Robert’s feet not far from the heater. 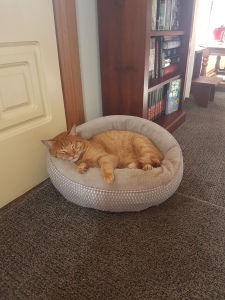 We are so fortunate to have this little cooking school – it’s wonderful to cook alongside people who are also passionate about food (and drink) made from the best produce that Tasmania has to offer.

Today all is (a little sadly) comparatively quiet. Herman still burns but sedately now that all the pizza cooking is over.

Carmichael’s fire has long since died. The trays now stand clean and at the ready for the next bake-up. 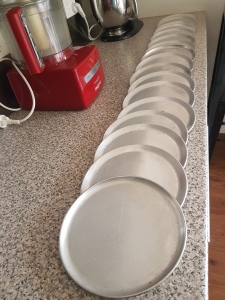 This morning I found a bowl of forgotten bread dough. I wondered where it got to – I’d stowed it amongst the cake tins on the shelf, now wonder I couldn’t find it! 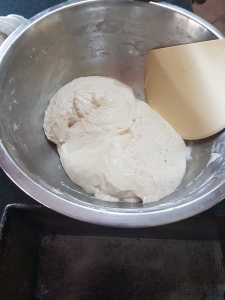 It was ice cold, but still obviously active, albeit very lethargic. I’ve tipped it now into a bread tin and when it finally rises again, it will be baked in Hester.

Meanwhile, we’ve started off another wet hop beer (the hops had been frozen for this purpose).

I think it’s time we made some more raspberry beer – inspired by a discussion with those who attended yesterday. 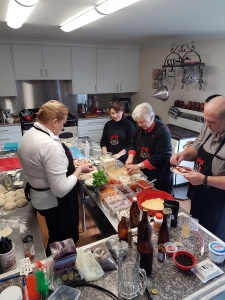 I am thinking too that I would like to make some pickled and spiced apple slices. We bought some lovely Red Ruby apples when we went for a drive to the Huon Valley a few days ago.

Another lovely time of cooking coming up this week, with lots of produce to experiment with, and a Party Food class here on Saturday.  Bliss.