Anyone who heard the ABC talkback of Saturday might remember a discussion with listener Elaine, who remembered with fondness bran muffins that a bakery in Hobart used to make back in the 1940s.

These are not like the muffins such as we tend to know them today, which are more like a cupcake. The ones Elaine spoke of were more like a round bread, a little larger than a crumpet, with soft dough and a lovely earthy flavour, not sweet.

Well I found the recipe in an old, old book I’d purchased from a op shop about 35 years ago – “101 Ways with Bread” – a Women’s Realm small soft cover publication.

I remember I used to make these buns/muffins when our children were young, great to serve with soup.

As was characteristic of many of the recipes in this book, I found extra liquid was needed, but other than that they turned out really well, and just as Elaine described them I hope.

Also had a cook-up in and on Hester for good measure.

I’d wondered how a pavlova would go – the ultimate test. I just used a three egg mixture and I was ecstatic – it turned out perfectly, with a crisp outer crust and lovely marshmallow centre. 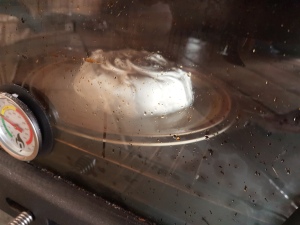 Meanwhile on the stovetop – lovely blood orange curd. What flavour those oranges have! A neighbour was visiting and loved the curd so much I sent the whole batch home with him, and then made more.

Lemon curd next, then back to the blood oranges, simmering the skins in water to soften them for marmalade.

Milk and butter are at the same time warming to go into the bran muffins, and malted barley mash for inclusion in this week’s upcoming loaves bread.

By now there was a bit of a traffic jam on Hester as you can see.

In the oven, the bread that had finished baking was tipped out of the tin.

We love a crispy brown crust here, so I popped it back into the oven to make that happen even more. It kept company in there with a Swiss Roll in the baking.

Hester was now fully occupied, with not even any space to heat for lunch, some of the Dutch Curry and Rice soup I’d made yesterday. Eventually got there – was able to make space when things cleared a bit.

Bran muffins baked early this afternoon, cleaning up done, time for a cuppa with a slice of Swiss Roll with coffee for dessert.

Just the sort of day I like – if you don’t count the cleaning up that is.