What a wonderful combination – preserving season and school holidays.

With tomato relish, raspberry jam, barbecue sauce, sweet chilli sauce, apricot chutney, kasoundi, lemon cordial and more needing bottling off in the cooking school, Charly and I decided to make biscuits while that other boring task was done.

A specific plan was formulated – she wanted to make peppermint flavoured choc chip cookies. I had a mind to make some shortbreads.

Now it’s an unfortunate thing that peppermint essence and rose water are both clear liquids. We tasted Charly’s dough once it was mixed.

“Tastes like musk sticks” she said. Checked the bottle – uh,oh! She’d picked up the wrong essence.

Never mind, I commandeered that dough to make some French Earl Grey flavoured shortbreads – the dough already had a back note of rosewater, so roughly ground and added 2 tablespoons of the tea leaves. The green colour? Didn’t matter, threw in the contents of a green tea teabag in keeping with the theme.

Charly made another dough, this time with peppermint essence, and her choc chip version was sensational. 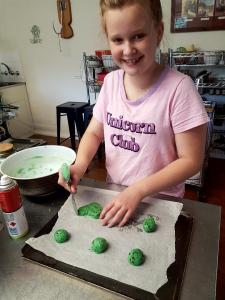 With a ‘tip of the hat’ to my dear old Nan, the tea shortbreads were drizzled with a little lemon icing. (Nan always drank her tea black, with a slice of lemon.) 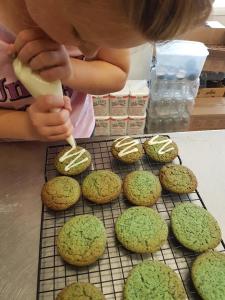 Charly’s received a touch of chocolate.

Meanwhile, this time of year I get a craving for Ajvar. Must be that red capsicum are in plentiful supply. No aubergine in sight so decided to use the last large zucchini instead, before the next of the bumper crop comes in from the garden.

But how to make it taste as good as eggplant, with its beautiful creamy texture? Tried baking chunks of zucchini to the point of a little char, and it worked like a dream.

Now the Ajvar is all ready to serve with fresh crusty bread when visitors pop in tomorrow.

What a great day we had, Charly and I, full of fun.

We are both given to clumsiness but managed only to break one big glass bowl between us today.

We have a talent for messiness too – leave a significant trail in our wake.

Never mind, plenty of time to do that chore this evening. No good spoiling a good creative day with a granddaughter by attending to such tedious things.

At the end of the day, a precious gift – she had secretly made a heart shaped, decorated biscuit for me to say thanks for the cooking fun. Should be me thanking her methinks.

One thought on “Fun in the Kitchen, summer style”