There was something not quite right in the household a couple of days ago.

Truffles and Poppy the Puppy were not at all impressed that the wood heater wasn’t alight. They are obviously fond of their creature comforts (if you will pardon the pun). 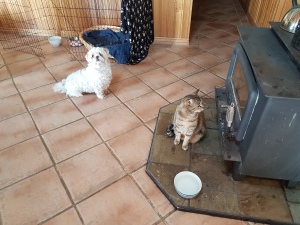 They sulked all morning, but all was to be well by later that day.  In fact, by dinner time the new addition to the household was in place, installed and burning brightly.

Yes, here is the reason they had to suffer such inconvenience – a Nectre Big Bakers Oven.

In my opinion, simply nothing can compare to baking in a wood-fired stove.

I’d wanted one, or something similar, for so long, since we were first married and went to stay with friends on a dairy farm. IT wasn’t possible to get me out of the kitchen the whole time we were there. You could bake all day and just use the ongoing heat.

For a long time there has not been a wood oven though that heats a large space, as well as functioning as an oven. I have checked this out for many years now, never finding quite the right combination.

However, this one reputedly does, according to the company’s promotional material.

So since our old wood heater was seriously ailing, we decided to bite the proverbial bullet and purchase this beauty (from Hunts Home Heating in Hobart).

I’ve watched and tended it for two whole days, “curing” it and seeing how it functions as a heater.

Today I baked in it for the first time. I threw together a cup cake mixture (not too much in each tin, no spillage to spoil its pristine interior).

It worked – and really well. I could maybe have had the temperature a little lower, but the fact that they split was probably more due to the fact that I’d thrown the batter together very haphazardly – oil instead of melting butter and so on. 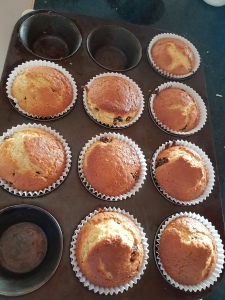 Now it’s on to bread that I have on the rise.

As husband Robert stood in front of it, warming himself after feeding the chickens, he asked “What are you going to call it?”

I’d not even thought about that. Of course it should have a name! After all, there’s wood stoves “Herman” outside and “Carmichael” in the cooking school.

I’ve had some great suggestions on my Facebook page.  Amongst them were “Honey” and “Nester”, and this is how I’ve come to call it “Hester”.

Incidentally, the bread I’ve had on the rise is now baked.  Just look at that crust, all crisp and beautifully browned.  Good work Hester!