It’s been a whirlwind week here in the cooking school.

Part of the pleasure of the classes for me is getting up early and baking treats for the people who are coming along. I couldn’t bear to think they would go away hungry.

Here’s a photo of some of the nibbles for Thursday’s class – herbed foccaccia to accompany the Labna (yoghurt cheese) during the morning and little blueberry and apple muffins with a lime glaze.

Our chooks are still laying prolifically, so there were individual egg and bacon pies, served warm along with the muffins when people arrived.

There was bread dough on the rise for pizzas we would make later in the morning, and of course scones for morning tea.

As we had a lady attending who was lactose intolerant, all items here in the photo were dairy-free.

Saw some programmes on tv this week, talking about getting old. Goodness me – who has the time?

Now this week’s classes are finished, it’s stock making day (by Hester). In the photo are the bones ready to go into the first stage of browning in the oven. Then they will go into pots on Hester’s stovetop and be boiled for several hours. 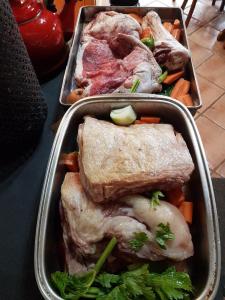 I will use some of the whey left over from the cheese making as the liquid – it’s too good to waste. The fat that settles on top once the stock is cooled, will be fed progressively to the chooks in their daily warm mash (must be good for them, they never go ‘off the lay’).

Robert is out in the cooking school bottling off his pear cider. He’s also mixing a brew of gluten-free beer.

Oh yes, then there’s the apple cider vinegar, made from the apple juice that was pressed here a few weeks ago.

(The cider itself incidentally, is delicious, just coming to maturity).

However, the bucket of apple juice we were hoping to turn into cider vinegar was a bit of a worry. Smelt funny, looked worse – was that mould on top? I’d banished it to the porch and waited to see what happened to the suspicious mixture after a few weeks.

We tentatively lifted off the muslin this morning and found it was not mould at all, but a vinegar plant! Once that was removed, the vinegar looked and smelt amazing. Beautiful colour. 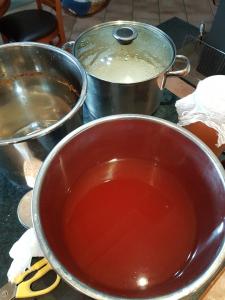 So the residual vinegar plant has gone into a jar with more apple juice. I want a good supply of that on hand. I will use it in bread dough, just a little to keep it fresh and in a whole range of cooking, but not preserving, as the acetic acid level may not be high enough.

So today – must be time for a little recreational baking because, as usual, Hester BBO is ready and primed to go….. 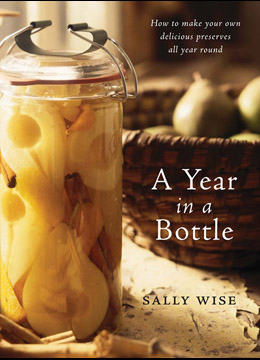 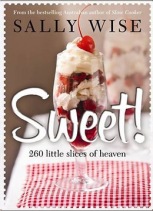