Yesterday was the designated day for the annual juicing and cider making.

Thanks so much to friends and family who came along to help. It was no mean feat chopping and pressing all those apples in the chill of the open shed door. 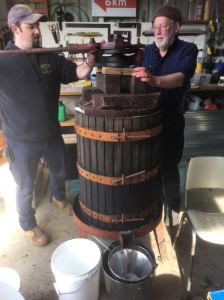 Lucky me got to stay in the kitchen to prepare food to sustain this amicable workforce.

The slow cookers came into their own with a rich pea and ham soup, spiced chicken drumsticks and apple cinnamon sponge with one alongside filled with its accompaniment of creamy custard. Yet another contained mulled wine that kept everyone warm.

There were muffins and breads and more (ably baked by Carmichael the slow combustion stove in the cooking school), including an experimental sourdough caramelised onion bread.

The process had some interesting moments, such as when an over-enthusiastic winding down of the press caused a pulp explosion that saw friend Dean apple-spattered from top to toe.

At the end of the day there were 8 kegs of cider prepared.

Today I’ll be preserving preserving (in the Fowlers Vacola) more than 100 litres of the remaining apple juice.

Lots of enjoyable drinking coming up over the coming months.

Nothing is going to waste of the spent pulp by the way – it’s going to an appreciative audience of pigs, ducks, chickens and sheep. 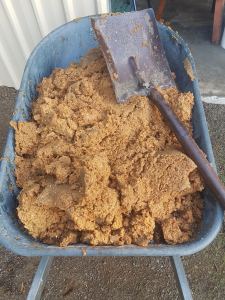 Sally Wise OAM is a bestselling cookbook author, a regular guest on ABC radio and the brains behind the Sally Wise Cooking School in Tasmania's Derwent Valley.
Find out more
Loading Comments...
Comment
×
%d bloggers like this: